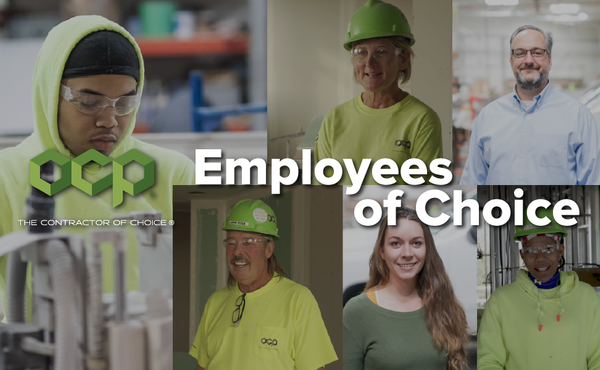 Anthony Corrado, a 310 laborer with OCP since 2012, was quickly promoted to laborer foreman due to his exceptional work ethic and leadership qualities. Anthony has been laborer foreman on several high profile projects such as the Aloft Hotel, CSU The Edge and Centric Apartments.

Matt Rutledge started with OCP in 2006 as an apprentice, working up to foreman. Matt is currently the exterior foreman on the Summa Bed tower project. Matt has supervised Hyatt Hotel at Legacy Village, The Edge, and Buildings 1,10, & 14 at the Pinecrest project.

Mason Galco, a 1st year apprentice carpenter and certified welder, started working with OCP in mid 2016. Mason is a quick learner and easily adapts to changes. Each day he maintains a positive attitude, willingness to help others, and safety consciousness.

Zachary Lawson, a Journeyman Carpenter working with OCP since 2014, is newly certified in rigging through the carpenters union. After his recent promotion to foreman, he has taken responsibility for a few larger projects in our Columbus market, making safety a priority. He remains open to new ideas and implementing them daily.

Tony Vance, part of OCP since 1996, is a second generation OCP carpenter. Tony is a very focused, driven, and admired team member. In the past year, he completed three projects with tightly compressed schedules. Tony has a reputation of keeping projects profitable, finalized before scheduled completion and under budget.