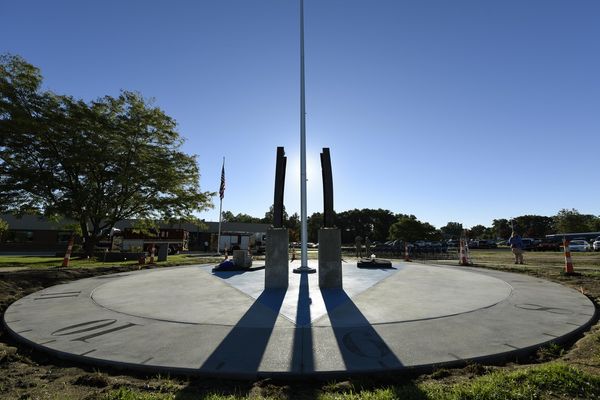 The Memorial was spearheaded by Herman Schwebes, Senior Master Sergeant with the 180th, who secured items from all three impact sites. Members of an industry coalition, TRACE - Toledo Regional Architects Contractors and Engineers - joined in to help bring his vision to fruition for the 180th Fighter Wing at the Toledo Express Airport in Northwest Ohio.

Shaped like a sundial, the Memorial includes artifacts from all three crash sites placed at the time of their events in 2001. The items include soil from the field in Shanksville, Pennsylvania where Flight 93 was brought down by its passengers, Limestone panel segments from the site of impact at the Pentagon, and a steel beam from the Twin Towers.OCP received the steel beam at our Holland/Toledo location, divided it into two sections as plans for the Memorial dictated, and sealed them with an industrial clear sealer to help preserve the beams for years to come.

As a tribute to Toledo being the glass city and more importantly, representing each of the lives lost that day, glass stars were skillfully extruded and hand-finished in colors representing each person’s role, from police officers and EMT’s to firemen, military members, and civilians. OCP Founder Barney Paskiet’s son Matthew Paskiet is an accomplished glass artist who donated both his skill and time in creating each of the stars out of hand-formed glass. OCP was also instrumental in creating the foundations for each set of stars within the Memorial features. They created the forms and worked with a black concrete mix to ensure the glass stars could be correctly spaced/placed, then sanded and finished in the concrete.

The Northwest Ohio 9/11 Memorial was dedicated on September 11, 2016, the 15th Anniversary of the terrorist attacks. Tours of the Memorial are available by appointment only.