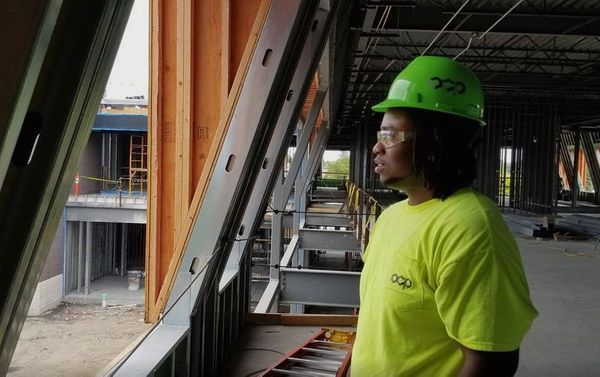 Article written by Mark Rosenberg of the Toledo Blade.

In June, 2017, Ricky Estis graduated from Whitmer High School and within weeks he was on a crew building apartments in downtown Toledo’s Fiberglas Tower.

On Thursday, just over a year later, the 20-year-old Toledo resident was sitting in the White House, listening to President Donald Trump unveil an executive order on workforce development.

Mr. Estis is just over a quarter of the way through a four-year apprenticeship with OCP Contractors, a Holland, Ohio-based construction company. Mr. Trump’s executive order called for the expansion of these types of vocational training programs to address what the White House called a “workforce crisis” in a news release.

“Trump wanted to [tell] the kids in high school that you don’t have to go to college, you don’t have to get in debt to have a good life,” said Mr. Estis, who played defensive tackle at Whitmer and learned construction at the school’s Career and Technology Center.

The executive order called for companies and trade groups to sign a “Pledge to America’s Workers” to expand job education and technical training programs, and established a “National Council for the American Worker” that will examine approaches toward training and retraining workers to fill industry needs.

At the White House, Mr. Estis represented the Signatory Wall and Ceiling Contractors Alliance (SWACCA), a one-year-old coalition of contracting companies that has expanded nationwide. SWACCA pledged to provide privately-funded training programs for 50,000 workers on Thursday.

“SWACCA is working on a nationwide campaign,” said Mr. Townsend, 60, of Maumee. “If you come in as an apprentice and work your way to journeyman … you can go all the way to becoming president of your company.”

Mr. Estis’s program provides a week of schooling every three months, and pay raises at six-month increments. Once he completes his apprenticeship, he hopes to become a project manager for OCP, he said.

Nationwide, tuition at two and four-year colleges has more than doubled in the last two decades, after adjusting for inflation, to an average of $22,432, according to the National Center for Education Statistics.

Mr. Townsend said the expansion of workforce training could provide more people with a path to self-sufficiency and help companies like his find more skilled workers.

“This is a huge task for workforce development, retraining high school teachers, counselors, guidance people, to let them know not everybody needs to go to college,” he said. “There’s plenty of opportunities, not just through carpenters but building trades and the manufacturing world, where you can have a pretty good life working 40 hours a week.”

To view the full, original article visit the Toledo Blade.