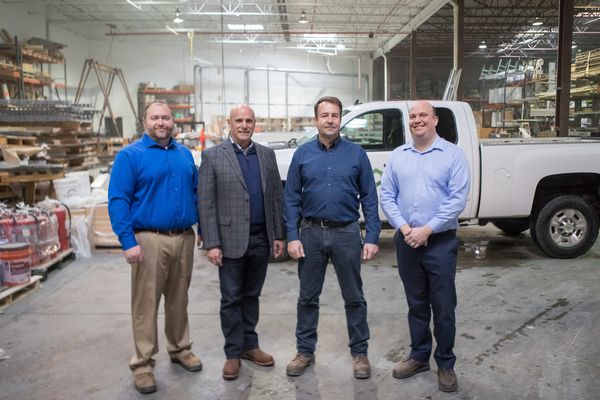 Cleveland's leading publication in the construction space, Properties Magazine, has featured OCP Contractors in their latest edition. In celebration of OCP's 50 years of success, the article looks to the employees, technology, and clients that have propelled the firm towards success. Additionally, the article highlights the history of OCP, and details the efforts that have made OCP the Contractor of Choice in Northeast Ohio.

Thank you to the many people who have been a part of our success over the last 50 years. We look forward to continued success with all of those who have made this milestone possible.

View the full Properties Magazine insert here, or read the article below. 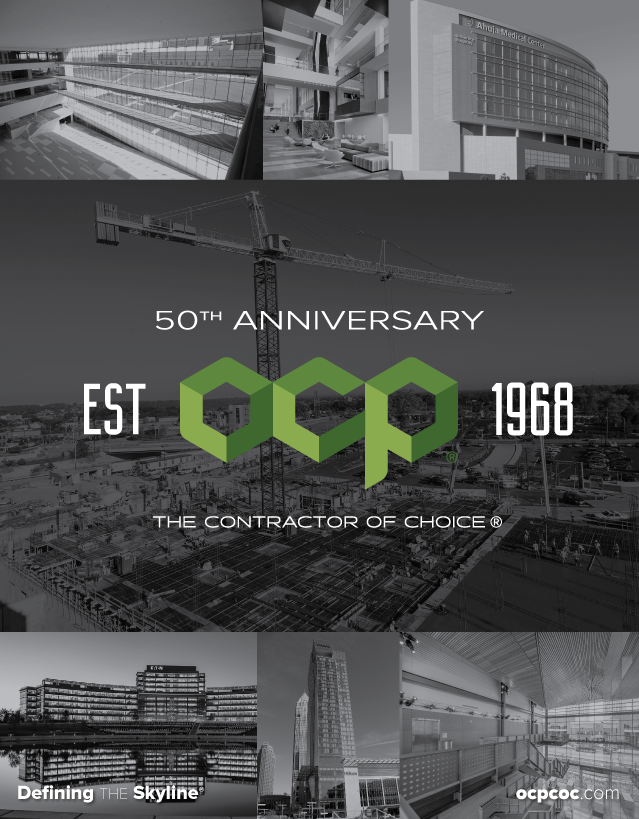 The firm’s slogan is ‘Defining the Skyline’ and is quite appropriate, since they have completed a majority of the new buildings in Cleveland, Toledo and Columbus. With three offices, OCP has become Northern Ohio’s largest interior contractor.

Service to their clients

A list of the company’s services from their LinkedIn page reads like a list of the newest and most sophisticated construction techniques: BIM, LEAN construction, Total Station, Integrated Project Delivery (IPD), pre-construction services, design/build, prefabrication & panelization, metal framing & drywall, acoustical, EIFS, millwork, specialty services and painting, plus spray-on fire protection and spray foam insulation. “When we work with clients, we listen intently – trying to understand all their needs, not just a narrow list of things an interiors contractor might typically offer,” explains OCP President Ed Sellers. “The CM’s we work for have a lot on their plate, and we provide more construction management services [like conceptual estimating] for our clients than anyone else in this city. It’s one of the things that sets us apart.”

“The other thing that we stress is openness and honesty. We keep exact records for all our projects, from budgeting through construction, enabling us to easily submit to costs verifications whenever requested. That’s what gets us the majority of integrated project delivery work in town.”

In Toledo, during the mid-1980s, under a Bowling Green State University internship, Matt Townsend began working for Ohio Ceiling & Partitions, which had been founded in 1968 by Barney Paskiet.

In 1995, to reflect Ohio Ceiling and Partitions’ growing capabilities, the firm’s name was changed to OCP Contractors. Two years later, Matt Townsend purchased the majority of stock in OCP and became president. With an eye to expand the firm, he looked for someone to head up an office in Cleveland.

In 2004, Sellers partnered with Townsend, opening the Cleveland office. “Our initial hope was for OCP Cleveland to be as successful as our office in Toledo had been for over 35 years,” says Townsend. Due to Sellers and Townsend’s combined reputations and the fantastic team built in Cleveland, that is exactly what happened.

“The relationships that many of our employees in the Cleveland market had from their very experienced past employment, played a huge roll in our success in the Cleveland market,” asserts Townsend. With his reputation for honesty, dependability and creativity, Sellers had no trouble finding projects in even some of Cleveland’s slowest years. The Cleveland office’s first project was the Cleveland Clinic’s parking garage at East 93rd. Being a ‘Clinic-Approved’ contractor meant substantial work would follow. In its first year, the team landed more than $5 million worth of projects.

“We’re doing a lot of design assist and integrated project delivery,“ says Sellers. “We’re far more active on the front end of jobs than we were in the 1990s. It’s a much more sophisticated delivery now.”

In 2009, with OCP continuing to land prestigious projects, the firm opened its third office, OCP of Columbus. Two years later, Sellers was named president of OCP as Townsend became CEO.

2013 would become a historic year for OCP Contractors as the firm began its prefabricated component system, enabling much of the field work to be preassembled before being delivered to the jobsite.

“We typically have a team of carpenters in the shop prefabbing much of our material. They can make whatever multi-repetitious item is needed for the project,” explains Brian Exl, vice-president of Pre-Construction Services.

It was also a historic year as the firm completed its largest ever contract – the $16 million combined Cleveland Convention Center and Medical Mart, now known as the Huntington Convention Center and Global Center for Health Innovation. By the end of 2013, OCP Cleveland completed projects including the 600,000-square-foot Eaton Center campus in the Chagrin Highlands of Beachwood, and the seven-story, 639,000-square-foot Goodyear Global Headquarters in Akron. More than 100 tradespeople were employed on each project.

Perceiving further opportunities, the firm expanded once again in 2015, adding a certified spray insulation group. “This gives us the opportunity to create a continuous insulation system over the exterior sheathing, creating a great air barrier,” says Exl.

The firm’s package now covered most all specialties from CSI Division 6 through Division 10. “And, if the CM needed someone to handle dock equipment, we’d add that in as well – whatever it took to meet a customer’s needs,” says Sellers.

“In-house, we utilize just about every technology possible to make sure we serve our clients better,” asserts Sellers. “We use AutoCAD, Revit, BIM, Rhino, and we’ve even added Total Station where all components can be laid out on X, Y and Z coordinates. When we see the door crack, we push it open.”

Sellers has always been interested in doing things that haven’t been done before. Over the years, he has developed many construction techniques that would eventually revolutionize the interiors construction business, such as prefabrication. “We now precut and preassemble everything possible before sending it to the jobsite. The Hard Rock Rocksino project was probably sent out 85% preassembled.”

“Another of our projects utilizing precut and preassembly was the Oatey World Headquarters, where again, probably better than 50% of the materials were precut before delivery,” says Exl, noting that while unions were initially worried that preassembly was all about eliminating labor, they’ve come to realize that the work can now be done more safely and more conveniently in a shop environment.

“OCP is constantly pushing new technology,” Townsend says. “In 2017 alone, we implemented a new ERP, production tracking technology and increased our push statewide into greater opportunities in prefabrication. Additionally, we are increasing our use of robotic layout, consistent use of tablet software on our projects and new technology in our prefab operations. We also continue to grow our use of BIM not only in precon but also internally to provide greater project coordination. Implementing greater use of technology within OCP has greatly helped our growth.”

Service to the industry

In addition to running one of the most successful interiors firms, Sellers makes time to give back to the industry where he found his success. Over the years, he’s been president of AGC of Ohio and Cleveland AGC (Associated General Contractors), and is the current president of AWCI (Association of the Wall and Ceiling Industry). He is presently chairman of the Construction Employers Association (CEA) and serves on the Carpenters’ Pension Board.

Having been involved with AWCI since 2006, Sellers has had the opportunity to travel the world meeting other interior contractors and sharing ideas. “I’ve incorporated dozens of ideas I’ve discovered and happily share those ideas and techniques with other contractors outside our market.”

Service to their employees

Where too many contractors claim “our employees are our biggest asset,” OCP puts them to shame with its training and benefit plans. Since its inception, Townsend and Sellers have promoted annual bonuses and profit sharing.

While other companies may fear training their employees will make them easy targets for their competitors, OCP aims to offer its people the best training available, like sending them to the Lean Construction Institute.

“Lean construction is a core value of what you can expect when you have OCP on your team along with IPD and design assist project delivery methods,” says Townsend.

“Everyone has a reputation, and our employees’ reputations drive our firm’s reputation,” philosophizes Sellers.

The workforce at OCP reflects diversification, both in gender and race, and the firm advocates strongly for programs to encourage more participation in the construction industry. OCP eagerly lobbied for the CEA’s involvement in its Community Benefits effort. “We are constantly advocating that contractors bring the inner-city community into the trades,” explains Sellers. “We also love to match millennials with our older workers. We found that they both benefit from the matchup.”

“Our other big focus is safety training for all employees. We are very strict about that, most often exceeding OSHA requirements,” says Exl. “We also offer other project-specific training for those doing things like project management or project estimating.”

“We have a high-performance culture that allows our employees to thrive,” explains Townsend. “Safety is first not only on our jobsites but also in everything that we do. Our culture centers around life balance, along with an aggression to win. We have an answer to the issue or problem at hand rather than a ‘no’. Training is ongoing, and we push innovation. We work hard and play hard.”

Family-friendly is another description that aptly fits OCP. Family outings and employee perks are common and enjoyed by all the staff.

The firm also provides its people with the top technology available, from iPads and Plan Grid, to an Oracle-powered comprehensive software package.

“We know our competition is watching what we do and are quick to pick things up that have worked for us,” says Sellers.

“OCP is very entrepreneurial and willing to take risks into new opportunities and expand our capabilities,” adds Townsend. “We believe it is OK to have a few mini failures to ultimately reach greater success and lessons learned. There is a willingness at OCP to try new things and to do business better. Expansion is always on the horizon geographically and through a diversified range of work scope.”

“One of the many reasons OCP has been successful over the past 50 years is that we are continually pushing to be the best at managing project schedules and always work to beat the project end date,” Townsend says. Focusing on his customers’ needs and the development of his team, Sellers is in an enviable position for the foreseeable future. Their reputation with customers is unmatched anywhere in the state, and their 50-plus awards attest to the quality of their work.

“We like to use as our tagline, ‘Contractor of Choice’,” adds Sellers. “But, you can’t use that as a tagline if you don’t measure up, so that’s what we are always striving for.”